A Trip of Noteworthy Mention 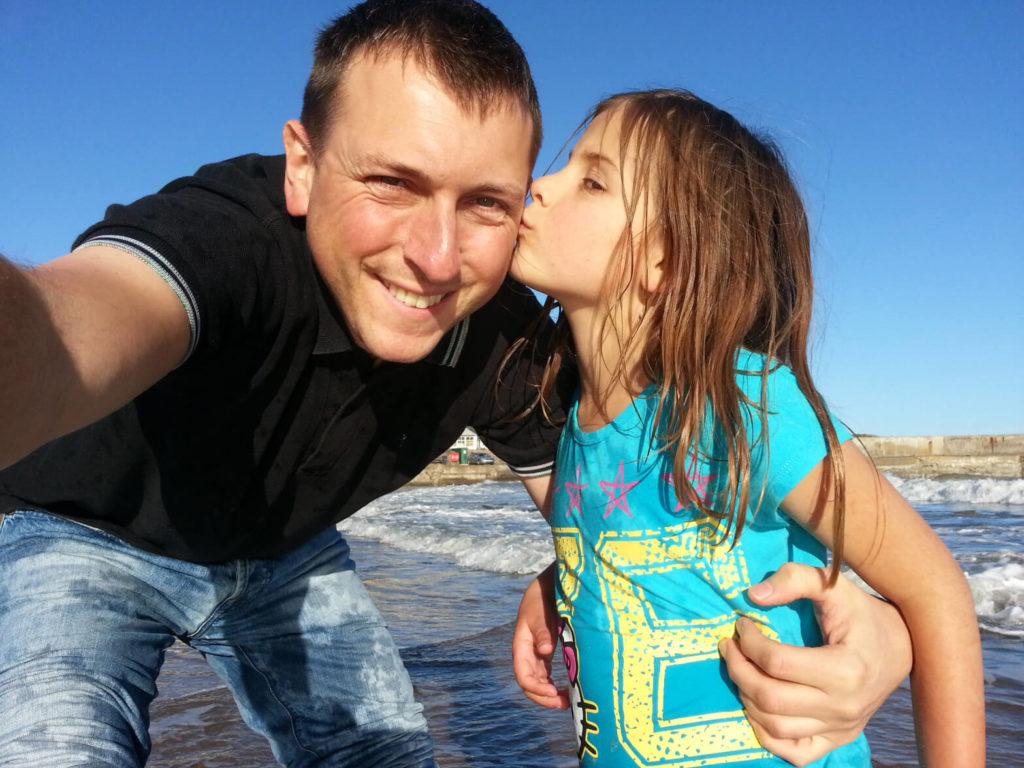 It had been a tough few months, and was only going to improve many years later.

So I decided that the rest of 2013 would consist of getting as much fun packed into my time off work as possible.

This was my 40th year and I was going to enjoy it despite the backdrop.

Kicking off with our first proper trip away in the camper.

I had absolutely no set plan, just wanted to head west or north from Aberdeen, wild camp as much as possible (avoid camp sites anyway – which we managed to) and wing it!

Nothing too hardcore up mountains or anything, not with the kids being so young; just off the beaten track a little.

It was a brave thing to do many told me. Taking my young kids away for 2 weeks by myself.

No campsites. Nee problem. Have trowel will travel! Haha.

They’ve always been game for an adventure, I love them for that so they were bang up for it.

Until the day I picked them up!

Remember that they were staying at my house, the old family home, when they were with their mam. And I was back in my flat temporarily.

And when I went round in the camper to collect them the garden was full of folk, family and some of their friends!

They got into the van and I pulled out my old school A3 sized Map of the British Roads on the double spread which shows Northern Scotland. None of that sat nav rubbish back in the heady days of 2013!

Sonny freaked a bit and said it was too far. So I asked “Well, where would you like to go?”

We went to Aviemore the previous October and he loved the RSPB Osprey nesting site (he had already picked up my love for ornithology) so stated with authority that he wanted to go there!

It was roughly half way to the west coast so was a prefect stopping off point!

We set off around mid afternoon.

That summer of 2013 saw a heat wave hit these shores.

I’d tried to get the 20 year old aircon system fixed but it didnt seem to be working so we were relying on the normal fans and windows being ajar to keep us cool in this big metal box with massive windows!

We set along the beautiful South Deeside Road following the River Dee upstream which meanders down towards the North Sea in the other direction.

When going through a wee village called Aboyne, I saw a familiar face on the path and a big smile and wave to beckon us to stop.

I pulled over and it was my mate Sid from back in South Shields who had not long moved up here as his brainbox of a wife had bagged a top job for an oil company! Her dad was Scottish and they loved it up here so was the ideal move for them.

He invited us to their garden for refreshments and a bite to eat!

We had a great catch up and played with Alfie, their crazy spaniel then were back on the road and had a superb drive over the stunning Lecht and arrived at the Boat of Garten pretty late.

The following morning we went to the RSPB site for a few hours then headed to the Landmark Forest Adventure Park, Aviemore which was a blast. It’s got all sorts for kids, tree top walks, rides, the lot and they loved every second.

Then we head to Loch Morlich right in the shadows of the Cairngorms! It is stunning. A beautiful sandy beach, and with the heat was like being on the Med! An ideal time to try out the new body boards and shorty wet suits I’d got the kids.

The kids wanted to spend the night on Loch Morlich, so we went to a nearby camp site and it was awful! Vans on top of each other. Screaming kids and boozed up parents! Sack that for a laugh. I wasn’t here for this type of shenanigans. Not this time anyway.

So we headed off to follow the sun setting to the west.

A little out of Aviemore and a small snag was hit.

We had the van windows open to keep cool, and when it got colder and tried to close them one of them would budge!

We soldiered on but it was too draughty and cold on the move for the kids so I called my breakdown company! We couldn’t drive for 2 weeks with the window open.

After an hour or so they came out and all the guy could do was frig the electrics so the window was fixed into the closed position! My window was now shut in the biggest heat wave Scotland had seen in years haha! Ideal!

We made it to Arasiag, found our wild camping spot and crashed after a long drive.

The last hour or so since Fort William, the journey had been in darkness, but from the way my full beam was lighting up the sides of the mountains I could tell that we were in for a treat in the morning.

How can you not fall in love with this?

Arasaig and the surrounding areas were stunning!

We pitched a tent on the beach to keep our stuff in to keep the van free to sleep.

Although one night the kids insisted that we sleep on the beach in the small 2 man tent.

It was a lovely idea but as we were sleeping in the van I didn’t think to bring any sleeping mats. The kids were fine sleeping directly on the rippled sand with their light frames but I had one of the worst night sleeps ever. The things you’ll do for your kids!

We ended up staying in the same spot for 4 or 5 days. Each day a new family seemed to come to visit the beach and the kids made a new friend from each one. It was a magic time for them.

Base camp. We all felt a bit Robinson Crusoe!

We were just mootchin’ up and down the shoreline, some crabbing, a spot of fishing with nets and a new rod I’d bought in Aberdeen.

On day we did a sea kayaking tour with a mate of a mate of mine who’s from up north. We had lunch on a wee island and were paddling with seals and dolphins coming right up to us. We were all in dream land!

Breakfast at the Sound of Arasaig pre kayaking. The tour guys were called Rockhopper and were fantastic so highly recommend them.

They were long action packed sunny days and we were crashing out about 9pm but had so much fun. We had a trip or 2 into Mallaig for provisions and the odd bar meal, etc but tended to keep to the beach.

After Arasiag we decided to slowly head back east following the Caledonain Canal which runs from Fort Bill to Inverness, alongside Loch Lochy, Loch Oich, then the monster Loch Ness!

Heading east along the Great Glen

Then onto to Chanonry Point where you can see dolphins feeding right in near the peninsular. Apparently the best place around to see them.

It was a stunning drive. And a few years later I would take that same journey but in a Canadian Canoe after climbing Ben Nevis with mates.

We stopped off a few times to explore including the pretty village of Fort Augustus.

Fort Augustus stop off and some of the lock gates. I would come though these in a canoe in a few years time in another amazing trip.

We got to Chanonary Point and saw the dolphins, they were amazing jumping and flipping around! Then headed to the nearby Black Isle Brewery tour for a bit of dad time! And a could of boxes to carry out! Haha!

Black Isle Brewery Tour! The kids have always been interested in practical things, science and engineering. Our guide was amazing.

This area is close to Invergordon, the first place I ever worked away from home. My last job before I landed in Aberdeen so brought back some great memories of that character building trip to North Scotland by myself. And now returning with my kids felt like I was showing them one of my old stomping grounds.

Cullen! Amazing fish and chips from “Lindas” looking down to Seatown and the amazing viaduct bridge in the distance.

We then slowly followed the beautiful coast line all of the way back to Aberdeen via the STUNNING Lossiemouth, Cullen for fish and chips and ice cream, Pennan (of the movie Local Hero fame) – what a bugger of a hill to take in the old Bongo though!

Pennan – made famous by the movie Local Hero. Theme tune coincidentally by Mark Knopfler, one of my local heros!

We spent our last night in the hugely picturesque village of Collieston where Sonny and Lolas mam was brought up. They both did but, Lola especially loved her granny, who still lived in the village. So we called ahead to check it would be okay and parked up there for the night.

Sonny and I slept in the van but Lola stayed with granny!

That was probably the highlight of the holiday for her! Bless her.

Sealed with a kiss! Collieston harbour and beach! The last day of our adventure.

The following day we headed back to Aberdeen and our great adventure has ended.

Just in time for the next one to begin!

I love feedback on my stories so please comment or get in touch if anything I’ve written has sparked any memories or thoughts close to your life.