A 40th to Remember 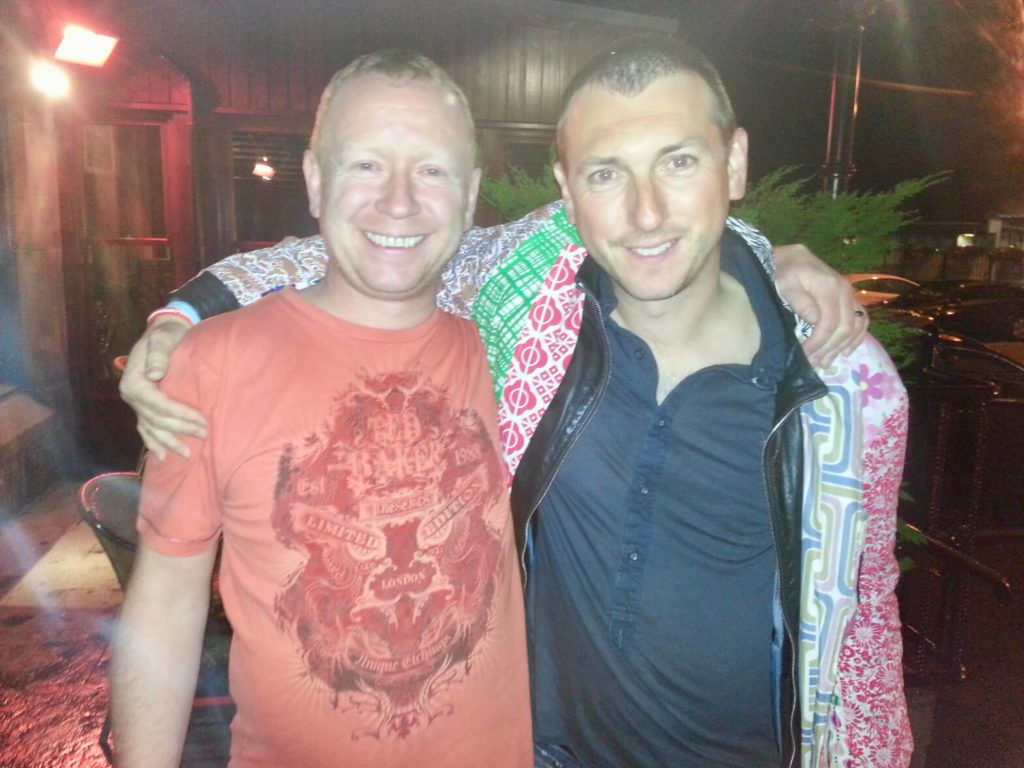 The remainder of summer 2013 included a lovely trip back to South Shields and a holiday in Keswick with Sonny, Lola, my mam, her partner, brother and his family.

Summer 2013 at our beloved Marsden Beach

It was great to get spend some quality time with my kids and family between the day to day grind of getting by without them in my life as much as previously.

Summer 2013 cycling along the old railway line in Keswick

I was struggling to adapt without them being around, or seeing them as often as I wanted to and found it tough.

But don’t get sad, things are cool right now!

My 40th was coming up and would normally have had something planned for it.

However, the kids routine still wasn’t well established at this point so making plans was difficult.

I wanted to have a big gathering of mates, inviting pals from South Shields up and have a bit of a stramash!

I felt that I needed a bit of a blow out after recent events.

But with the uncertainty when I was getting the kids I didn’t organise anything until a week or so before at the start of September.

Before that though, in the August I had a great trip to the Formula 1 in Belgian at the legendary Spa race course!

My mate from Shell who was a “staffy” (i.e. was employed by them, as opposed to us common contractors) won about 6 tickets in a raffle.

He asked if I wanted one, paid of course!

Even though I wasn’t interested in F1 in the slightest I snapped his hand off.

I have always loved sports, but never really classed driving a car as a sport.

Even so I always like experiencing new things and enjoyed the weekend.

I found grown men, walking round in Alan Partridge-esqe black bomber jackets with Castrol GTX advertisments on the back and idolising someone who got paid millions to drive a car a bit weird.

But I guess it’s no different to football in that respect but I’ve totally fallen out of love with that sport as well. Okay business, but you know what I mean…

F1 2013 Belgium Grand Prix – I’m not into F1 but had a great weekend. Free bar all weekend helped!

For my 40th night I organised a bar crawl around the harbour area of Aberdeen on the Saturday night with a bunch of pals from Aberdeen.

We were to meet at some “Presecco Bar” as a couple of the lasses wanted somewhere with prosecco on tap! Haha! These Aberdeen lasses liked their drink as much as the girls back in South Shields!

But before Saturday came I had a wee adventure to tackle!

A bunch of mates I hill walked with go to Aviemore (an hour and a half from Aberdeen) on a golfing trip the first weekend in September every year.

I couldn’t make the full trip so Kev, my pal said I should try to get over and join them for the Friday night at least. Sounded a plan!

I love Aviemore and its got a few decent bars and is always a good laugh, especially with these boys.

So I finished work on Friday, dropped some football boots off for Sonny then drove the scenic route of the Lecht to join my pals in the heart of the Cairngorms!

By the time I got there they were all well oiled, having finished golf mid afternoon and straight onto the drink (in fact they’ve have had a few cans during their round no doubt)!

So I was playing catch up but I got there in the end.

We had a right laugh. We ended up singing with a guitarist that was on in one of the bars. Well I did anyway haha!

I had not long joined a band, through some folk at work, as guitarist but ended up being the singer so was aways good to give the vocal chords a good work out!

Then we went clubbing, probably tried some tragic dad dance moves on the dancefloor and collapsed into bed in the early hours.

When I was good enough to drive the next day I headed back to Aberdeen in my trusty Bongo camper.

The water level needed topping up, not a good sign. I took another bottle of water in the van with me just in case.

I got to Grantown-on-Spey and it needed topping up again. I feared the worst, then just as i was passing the Aberlour Whisky Distillery steam started coming from the font of the van so I pulled over.

I knocked on one of the cottages associated with the distillery and a kind lady gave me water to top up the system. It wasn’t long to Aberlour so thought I’d get to there then call breakdown! At least I could get some food and drink there. What is it with me and vehicles haha!

I got there and called breakdown and went and grabbed a bacon roll, a cuppa and a fancy piece (cake) and lay in the van to sleep my hang over off. It was actually nice to get some rest haha!

The first guy came to assess the van and said it wasn’t repairable on the roadside and that I’d get towed back to Aberdeen! He confirmed what I thought and was likely the head gasket that had blown.

So by the time the 2nd guy came to with the big wagon it was getting on a bit, time wise.

I finally got a phone signal and called a mate back in Aberdeen and said I wasn’t sure what time I’d make the night out!

In the end we got back to Aberdeen, dropped the van off at my local garage and I was showered, washed and in the taxi to make the meeting time of 7pm bang on!

We did the bar crawl.

Connie one of my mates did a hairdressing course with the manager of the gay bar Cheers and kept disappearing and was having treble vodkas and the other mam who shall remain nameless had to get bundled into the taxi. We all ended up going into Cheers later and I remember playing pool with some 6 foot tall geezer with arms like Arnie dressed in drag and had a great laugh.

And the night ended up in the legendary 80s night club, Club Tropicana. Drinks are not free!

Meeting one of my childhood heroes He-man in Club Trop!

Even He-man the master of the universe made an appearance to round off a great night and a 40th weekend to remember!

I love feedback on my stories so please comment or get in touch if anything I’ve written has sparked any memories or thoughts close to your life.